The camp is emerging at the crossroads of urban studies, architecture, geography, anthropology, and humanitarian practice, reflecting both the spatialisation of biopolitics and the urbanization of emergency. Camp studies have challenge various paradigms and urban dimensions putting knowledge, protocols in crisis.
This seminar series, in its second edition, is intended to offer an interdisciplinary reflection on the dispositif of the camp reflecting on the tensions between permanence and temporariness, exception and normalization, politicization and depoliticization.
The seminars are part of the Urban and Regional Development PhD program but open to everyone who wish to attend and contribute. Sessions will be in English. The series is part of a transdisciplinary research lead by Prof. Camillo Boano around such specific site of enquiry, struggle and subjectivation and benefit from the involvement of experts and scholars who from different geographies, epistemologies and methodologies have investigated the political significance of camp and its broader spatial implications.

Registration is needed writing to camillo.boano@polito.it


All seminars will start at 15.00 CET. Link to the virtual classroom: https://didattica.polito.it/pls/portal30/sviluppo.bbb_corsi.waitRoom?id=27675&p_tipo=DOCENTE

Program of the seminar series (462 KB)

The built environment as an added educator in East African refugee camps” published by UCL Press and available at: https://www.uclpress.co.uk/products/176569


08.02.22 - Elena Isayev - A world before (or without) the Camp? Asylum and Refugee Agency before the Nation-state
Virtual room link 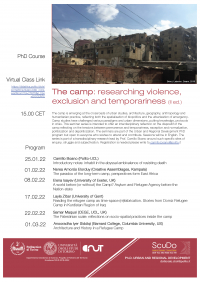