ROUNDTRIP II: From the Alps to the Andes. Le Corbusier and the members of the Latin American Modern Movement

Call for Contributions:
For all communication with the organization and the submission of abstracts and final papers, please use this email address:

Dates:
Six sessions on a monthly basis, presented by international researchers reflecting on some of the protagonists of the Latin American Modern Movement who have developed urban projects for the continent, contributing to the debate on the contemporary urban landscape.
After the first lecture series (October-December 2020), "Roundtrip: From the Seine to the Rio de La Plata" (see more on YouTube Channel ex-momo) on the relationship between Le Corbusier and Argentina starting from the journey of 1929, in this second cycle will deepen the role of the protagonists of the Latin American Modern Movement through the architects - from Berta Zegarra Russo to German Semper, from Luz Amorocho to Lucio Costa - who developed an educational and professional relationship between the two continents.
The aim of these meetings is to reflect on urban projects, whether completed or not, the result of the exchanges of shared modernity between Europe and Latin America. Among the topics: the role of correspondence exchanges / the contribution of women architects / the realization of the urban proposals of the Modern Movement / preservation and enhancement of the heritage resulting from these exchanges. 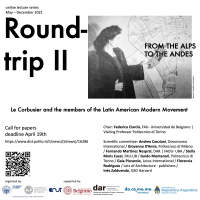